The Life of a Hood Star: Trap Queen (Paperback) 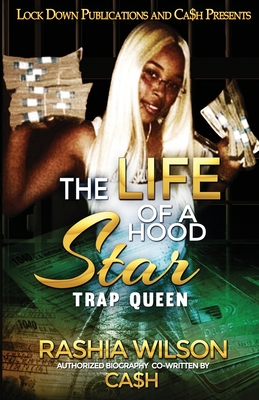 The Feds labeled her the Queen of Tax Fraud, and accused her of defrauding the United States government out of twenty-one million dollars. The streets called her the 1$t Lady. BET gave her the title TRAP QUEEN. Whatever the label, RASHIA WILSON wore it well because she was undisputedly a BO$$ CHICK and Tampa Bay's most well-known female HOOD STAR. Like many around the way girls, Rashia was born into a desultory struggle of which she saw no way out of but to hustle and grind. Along the way, she was used by man after man, and she was in and out of jail for an array of crimes and money schemes. But, when she crosses paths with a particular street entrepreneur, Rashia quickly goes from hood rat status and groupie to SUPASTAR. With her newfound celebrity and ill-gained wealth, Rashia is courted by many of your favorite rappers, entertainers and professional athletes, and she's giving up the tea in her steamy relationships with many of them. Unfortunately, with the fame comes a plethora of haters and the Feds, who are always watching. When Rashia's rock star life takes a drastic turn for the worst, will THE LIFE OF A HOOD STAR be worth the long prison sentence that awaited her?