Built to Burn: Tales of the Desert Carnies of Burning Man (Paperback) 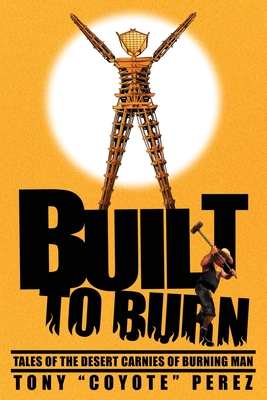 BUILT TO BURN tells the story of how Tony, a San Francisco blues musician, became Coyote, builder of Burning Man's legendary city in the desert, and how he came to lead a ragtag band of circus runaways, freaks and geeks that would become its Department of Public Works. In 1996, Tony was making a decent living as a musician, but his creative juices had run dry: one night onstage, he realized he'd just played an entire sax solo while thinking about his laundry. So when a wild-at-heart friend invites him to something called "Burning Man," he grabs his backpack and hops in the car, unaware that the experience ahead will not only turn him inside out, but alter the course of his life. An essential Burning Man origin story, BUILT TO BURN chronicles the wild uncertainty and creative chaos of the early days in the desert, when the event's future was under constant threat and the organizers were making everything up as they went along. It's a tale of struggle and survival, of friends made and friends lost, as Coyote and his misfit crew battle raging storms, crazed livestock, angry townsfolk and each other, locking horns with the real-life cowboys, Indians, outlaws and outcasts of Nevada's high desert frontier.
Told with wry humor and a bit of cowboy philosophy, BUILT TO BURN invites the reader to experience Burning Man as it was before it got civilized, when it was as wild and untamed as anything out of the Old West.