The Secret Lives of Planets: Order, Chaos, and Uniqueness in the Solar System (Hardcover) 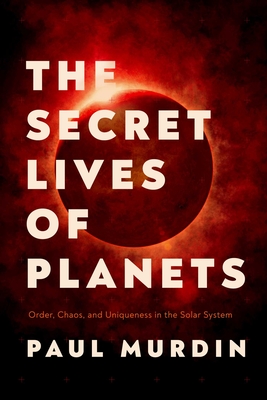 An insider’s guide to astronomy reveals everything you need to know about the planets, their satellites, and our place in the solar system.

We have the impression that the solar system is perfectly regular like a clock or a planetarium instrument. On a short timescale it is. But, seen in a longer perspective, the planets, and their satellites, have exciting lives, full of events.

For example, did you know that Saturn’s moon, Titan, boasts lakes which contain liquid methane surrounded by soaring hills and valleys, exactly as the earth did before life evolved on our fragile planet? Or that Mercury is the shyest planet? Or, that Mars’s biggest volcano is one hundred times the size of Earth’s, or that its biggest canyon is ten times the depth of the Grand Canyon, or that it wasn’t always red, but blue?

The culmination of a lifetime of astronomy and wonder, Paul Murdin’s enchanting new book reveals everything you ever wanted to know about the planets, their satellites, and our place in the solar system.

Paul Murdin has worked as an astronomer in the United States, Australia, England, Scotland, and Spain, where he led the operation of the Anglo-Dutch Isaac Newton Group of telescopes. He has been a research scientist (studying supernovae, black holes, and neutron stars) and a science administrator for the British Government and the Royal Astronomical Society. He is Emeritus Professor at the Institute of Astronomy at the University of Cambridge, England. He has been honored in Britain by the Queen for his services to astronomy.

“An awe-inspiring tour of the solar system’s most noteworthy celestial bodies. Murdin’s fondness for his subject is evident throughout this elegant, imaginative survey and should be contagious to all who encounter it.”
— Publishers Weekly (starred)

In this highly readable survey of the planets from Mercury outward, astronomer Murdin summarizes the scientific knowledge about each...A first-rate introduction to the solar system.
— Booklist