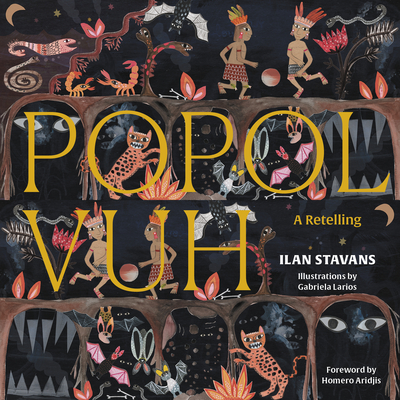 The archetypal creation story of Latin America, the Popol Vuh began as a Maya oral tradition millennia ago. In the mid-sixteenth century, as indigenous cultures across the continent were being threatened with destruction by European conquest and Christianity, it was written down in verse by members of the K'iche' nobility in what is today Guatemala. In 1701, that text was translated into Spanish by a Dominican friar and ethnographer before vanishing mysteriously.

Cosmic in scope and yet intimately human, the Popol Vuh offers invaluable insight into the Maya way of life before being decimated by colonization--their code of ethics, their views on death and the afterlife, and their devotion to passion, courage, and the natural world. It tells the story of how the world was created in a series of rehearsals that included wooden dummies, demi-gods, and eventually humans. It describes the underworld, Xibalba--a place as harrowing as Dante's hell--and relates the legend of the ultimate king, who, in the face of tragedy, became a spirit that accompanies his people in their struggle for survival.

Popol Vuh: A Retelling is a one-of-a-kind prose rendition of this sacred text that is as seminal as the Bible and the Qur'an, the Ramayana and the Odyssey. Award-winning scholar of Latin American literature Ilan Stavans brings a fresh creative energy to the Popol Vuh, giving a new generation of readers the opportunity to connect with this timeless story and with the plight of the indigenous people of the Americas.

About the Author: Ilan Stavansis the publisher of Restless Books and the Lewis-Sebring Professor of Humanities and Latin American and Latino Culture at Amherst College. His books include On Borrowed Words, Spanglish, Dictionary Days, The Disappearance, and A Critic's Journey. He has edited The Norton Anthology of Latino Literature, the three-volume set Isaac Bashevis Singer: Collected Stories, The Poetry of Pablo Neruda, among dozens of other volumes. He is the recipient of numerous awards and honors, including a Guggenheim Fellowship, Chile's Presidential Medal, the International Latino Book Award, and the Jewish Book Award. Stavans's work, translated into twenty languages, has been adapted to the stage and screen. A cofounder of the Great Books Summer Program at Amherst, Stanford, Chicago, Oxford, and Dublin, he is the host of the NPR podcast In Contrast.About the Illustrator: London based Salvadoran artist and illustrator Gabriela Larios received her Master of Arts from Camberwell College of Arts, UK in 2007 thanks to an Alban Scholarship. She creates whimsical and colourful collage illustrations that celebrate her deep love of children's books, textiles and folk art. Her creative world derives from her interest in storytelling and the natural world. There is a naive and playful spirit captured in her work and a strong connection between memories of her childhood in El Salvador and her body of work: tortoises, fish, plants, birds and all the colourful creatures and elements found in her art. Her work has been exhibited in London, Europe and abroad and has appeared in various international books and magazines.