The Mental Game of Baseball: A Guide to Peak Performance (Paperback) 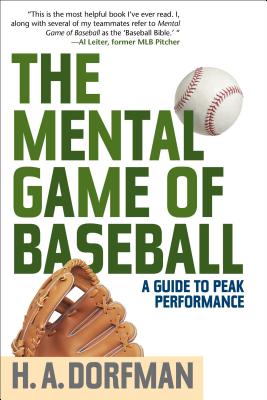 In this book, authors H.A. Dorfman and Karl Kuehl present their practical and proven strategy for developing the mental skills needed to achieve peak performance at every level of the game.The theory and applications are illustrated by anecdotes and insights from major and minor league players, who at some point discovered the importance of mastering the inner game in order to play baseball as it should be played. Intended for players, managers, coaches, agents, and administrators as well as fans who want a more in-depth look at the makeup of the complete baseball player.

H.A. Dorfman was a noted sports psychologist as well as a sports psychology counselor with the Scott Boras Agency. Recognized as a leading sports psychologist across the world, Dorfman was also a columnist and freelance journalist with articles appearing in The New York Times, The Boston Globe, and The Miami Herald. He has authored three other books: Coaching the Mental Game, The Mental ABC's of Pitching, and The Mental Keys to Hitting. Karl Kuehl was a baseball scout, farm system official, coach and manager in Major League Baseball. Throughout his career, he worked with teams such as the Montreal Expos, the Minnesota Twins and the Oakland Athletics. He was the co-author of two books: The Mental Game of Baseball and A Champion's State of Mind.