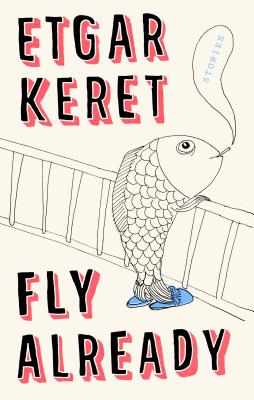 "There is sweetheartedness and wisdom and eloquence and transcendence in his stories because these virtues exist in abundance in Etgar himself... I am very happy that Etgar and his work are in the world, making things better." --George Saunders

There's no one like Etgar Keret. His stories take place at the crossroads of the fantastical, searing, and hilarious. His characters grapple with parenthood and family, war and games, marijuana and cake, memory and love. These stories never go to the expected place, but always surprise, entertain, and move...

In "Arctic Lizard," a young boy narrates a post-apocalyptic version of the world where a youth army wages an unending war, rewarded by collecting prizes. A father tries to shield his son from the inevitable in "Fly Already." In "One Gram Short," a guy just wants to get a joint to impress a girl and ends up down a rabbit hole of chaos and heartache. And in the masterpiece "Pineapple Crush," two unlikely people connect through an evening smoke down by the beach, only to have one of them imagine a much deeper relationship.

The thread that weaves these pieces together is our inability to communicate, to see so little of the world around us and to understand each other even less. Yet somehow, in these pages, through Etgar's deep love for humanity and our hapless existence, a bright light shines through and our universal connection to each other sparks alive.

Etgar Keret was born in Ramat Gan and now lives in Tel Aviv. A recipient of the French Chevalier des Arts et des Lettres, the Charles Bronfman Prize, and the Caméra d’Or at the Cannes Film Festival, he is the author of the memoir The Seven Good Years and story collections including The Bus Driver Who Wanted to Be God. His work has been translated into forty-five languages and has appeared in The New Yorker, The Wall Street Journal, Wired, The Paris Review, and The New York Times, among many other publications, and on This American Life, where he is a regular contributor.

“Reading Fly Already is like settling down for a ride in a luxurious car with a world-class driver who has an extremely crazy worldview that doesn’t interfere with his amazing driving. Is there any better way to see the world?”
– Elif Batuman

"Etgar Keret, the writer of absurd, sad, funny and very short stories, grows up.... These sardonic and very short fables are the next installment in the series of strange scenarios cooked up in Keret’s brain.... They are absurd stories your stoned friend might unfold while giggling, but the best of them land at some insight into the human condition, all economy and charm. This new collection, though, plumbs darker depths." – Gal Beckerman, The New York Times

"It’s Keret’s particular brand of brilliance that can simultaneously hold tragedy and comedy, and in such compact packages." – Financial Times

“An Israeli writer is making short stories fun again. Etgar Keret doesn’t avoid a punch line. The fiction writer and This American Life regular tackles Big Important Subjects in his work—death, family, war, etc.—but he does so in a way that’s not, well, a bummer . . . By embracing the comic and the absurd, Keret achieves something rare among modern short-story writers: He’s actually worth reading.” – Men's Journal

“These stories—swervy, thrillingly funny, honest, and almost shockingly alert—disarm a reader in abundant ways. Keret will look at any situation and any type of character with an open eye to all defenses, and slowly (or really quickly) peel these away.”
– Aimee Bender

"Read Etgar Keret’s short stories in Fly Already, not only for their brilliant language and imagination, but the depth of Keret’s craft." – Elif Shafak, The Guardian

“As a reader, you’re so immersed in Keretworld, that the twist in the tale is particularly more outrageous and unexpected than usual. Fantastical, heart-breaking, laughter-inducing, fabulist, and sometimes just downright wacky, Keret’s writing is palpably imbued with a distinct element of intimacy, as though the author has just invited you into his local café or pub to chat about the state of the world — of our world — over your drink of choice. Keret’s stories shimmer with an energizing, evocative amalgam of comedy, both dark and light, and a high-level tolerance for the absurd. And always — always — even when it feels as though he’s finessing his pages with a giant shrug about the ridiculous vagaries of the universe, inherent in Keret’s writing is a resolute insistence on adhering to life, as well as to the ineluctable joys of wordplay.... If you’re already familiar with Keret’s work, this is a welcome addition to his canon; if you haven’t read him yet, this collection is a terrific place to start.” – Daneet Steffens, Boston Globe

“When you read an Etgar Keret story, it’s hard not to go straight to ‘genius.’ The stories in this collection are wide-ranging, and many have that fantastical, highly imaginative Keret element. There is dark humor, wry humor, really-fucking-funny humor. There’s depth and sadness. And mostly there’s life: people falling into and out of relationships with themselves and others.” – GOOP

“I am in awe of Keret's ability to simultaneously make me laugh while crying, explore the joy and horror of every day life with precision, brevity and great psychological depth. His recognition of and engagement with the absurd is profound and he never loses his humanity, his heart long the way.”
– A. M. Homes

"Keret at his best — tender and inventive, not giving too much away.... Keret shines when he's gentle and when he gives himself room to explore his characters.... ['Pineapple Crush' is] a lovely, understated story about the human need for connection, and Keret approaches it subtly, portraying the narrator's loneliness without resorting to pity. He doesn't overplay his hand or feel the need to wax whimsical; he's content to consider the human condition in a compassionate, unshowy way. The story is nearly perfect.” - Michael Schaub, NPR

“Like Lydia Davis, Etgar Keret has written stories of such singular diminutive style it took the culture a few years to realize: this is not a novelty act. This is the work of a genius, and he can pack more comedy and heartache into a single tale than just about any writer alive. A new book is cause for celebration.” – John Freeman, LitHub

“Keret continues his streak of writing short stories that are mordantly funny and bizarre in his latest collection . . . Threaded through his sense of humor, you feel a little less lonely, a little more light.” – Tomi Obaro, Buzzfeed

“[O]nce again displays his knack for comic, absurd, occasionally dystopian observations... Saunders-esque speculative stories... Every piece demonstrates Keret's admirable effort to play with structure and gleefully refuse to be polite about family, faith, and country. An irreverent storyteller who has yet to run out of social norms to skewer.” – Kirkus

“It’s difficult to characterize the work of a writer as prodigiously talented as Keret... for whom nothing seems off limits.... [S]mart, strange, completely enthralling.... [R]eaders new to Keret will be dazzled.” – Booklist

“[Q]uirky, funny, touching, immensely readable, pure pleasure—and though most [stories] are very short, they are tightly scripted and satisfyingly complete. Originally written in Hebrew, the pieces in this fine collection lose nothing in translation; the wit and humanity of each tale survive intact. Ideal reading for short bursts of time or short attention spans.” – Library Journal

"If I could get you to read one writer, it would be Etgar Keret. His impossible blend of humor and tragedy, cynicism and empathy as well as big-hearted narratives that occupy the tiniest of page counts make him one of my favorites. Maybe one of yours." --Carolyn Kellogg, The Los Angeles Times

"A brilliant writer...completely unlike any writer I know. The voice of the next generation." --Salman Rushdie

"Read him, and the world will never look the same again." --Claire Messud

"One of my favorite Israeli writers." --John Green

"Etgar Keret's stories are funny, with tons of feeling, driving towards destinations you never see coming. They're written in the most unpretentious, chatty voice possible, but they're also weirdly poetic. They stick in your gut. You think about them for days." --Ira Glass, host and producer of This American Life

"[Keret's writing] testifies to the power of the surreal, the concise and the fantastic... [O]blique, breezy, seriocomic fantasies that defy encapsulation, categorization and even summary." --Washington Post

"It's astonishing what he can do in just two pages: go from funny to bizarre to touching to satiric to meta to surprising and surreal... [A] master storyteller, creating deep, tragic, funny, painful tales with scarcely more words than you've read in this review." --Carolyn Kellogg, Los Angeles Times