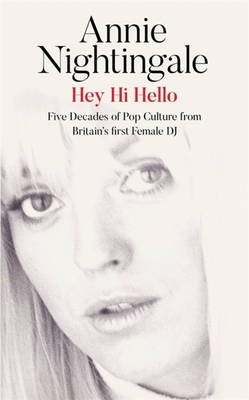 Hey Hi Hello is a greeting we have all become familiar with, as Annie Nightingale cues up another show on Radio One. Always in tune with the nation's taste, yet effortlessly one step ahead for more than five decades, in this book Annie digs deep into her crate of memories, experiences and encounters to deliver an account of a life lived on the frontiers of pop cultural innovation.

As a dj and broadcaster on radio, tv and the live music scene, Annie has been an invigorating and necessarily disruptive force, working within the establishment but never playing by the rules. She walked in the door at Radio One as a rebel, its first female broadcaster, in 1970. Fifty years later she became the station's first CBE in the New Year's Honours List; still a vital force in British music, a dj and tastemaker who commands the respect of artists, listeners and peers across the world.

Hey Hi Hello tells the story of those early, intimidating days at Radio One, the Ground Zero moment of punk and the epiphanies that arrived in the late 80s with the arrival of acid house and the Second Summer of Love. It includes faithfully reproduced and never before seen encounters with Bob Marley, Marc Bolan, The Beatles and bang-up-to-date interviews with Little Simz and Billie Eilish.

Funny, warm and candid to a fault, Annie Nightingale's memoir is driven by the righteous energy of discovery and passion for music. It is a portrait of an artist without whom the past fifty years of British culture would have looked very different indeed.

Annie Nightingale CBE is Britain's first female DJ, and longest serving broadcaster on BBC Radio 1. She celebrated her 50th anniversary in 2020. Her radio shows are listed among 50 cultural highlights by the Observer critics' panel, March 2020. A presenter, documentarian and journalist, she was the sole anchor of BBC's music TV show The Old Grey Whistle Test and associated TV programmes for 11 years during 1970s and 80s.
Her previous published memoirs are Chase The Fade (1982) and Wicked Speed (2000).
As well as touring the world as a live DJ, she has also released music compilation collections, including Annie On One (Heavenly) and Masterpiece (Ministry Of Sound).
Annie was born in South West London and lives in West London.

Annie was important to me back when I was a teenager, when not only was she one of the few people playing records I liked, she was a WOMAN doing it, which was inspirational to me. I wrote about her in my book Another Planet, where I quote a diary entry from 1978 which listed things I was loving in between watching Bowie on tv and taping a Bruce Springsteen album, the entry simply says, 'Listened to Annie Nightingale'

Full of brilliant anecdotes, this autobiography offers a rare insight into a woman who has lived at the forefront of pop culture.—The Sun

I can't imagine what growing up without Annie Nightingale would have been like. I don't want to contemplate the limitations that would have been imposed on my cultural life and my own ambitions in that sphere without her presence. Thank god I don't have to and she was there every step of the way from a voice on the radio to an enthusiastic comrade in the chill out zone and post-rave party

Many of her stories are entertaining [...] and the book includes short, funny, informative interviews with leading lights of the day.—Charlotte Heathcote, Sunday Express

It wasn't until I heard Annie Nightingale on Sunday evenings after the chart rundown that I understood what music radio could be. Nightingale had a broader music taste than, say, John Peel, but was alternative enough to introduce me to songs I never would otherwise have heard. She's still on Radio 1 now, at the very Nightingale time of 2am. She still plays tracks I hate, tracks I love. She's still the best—Miranda Sawyer, Observer