A Coney Island of the Mind (Hardcover) 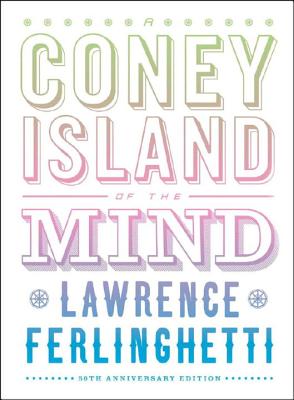 By Lawrence Ferlinghetti
$23.95
Email or call for price.

A million copies in print—translated into over a dozen languages—one of the best-selling and most popular books of poetry ever published, now available in a new hardcover edition containing a CD of the author reading his work.

Ferlinghetti is a national treasure, and his voice has become part of our collective conscience. Some of his most famous poems from this collection such as "I Am Waiting" and "Junkman's Obbligato" were created for jazz accompaniment. Written in the conservative post-war 1950s, his poems still resonate, as they will continue to resonate, with a joyful anti-establishment fervor that beats a rhythmic portrait of humanity. Ferlinghetti sings of a world in which "the heart flops over / gasping 'Love'," "cadillacs fell thru the trees like rain," and where "we are the same people / only further from home / on freeways fifty lanes wide."

This special 50th Anniversary Edition comes with a newly recorded CD of the author reading the 29 poems of the title section of A Coney Island of the Mind as well as selections from Pictures of the Gone World.

In 1953 Lawrence Ferlinghetti cofounded City Lights, the first paperback bookstore in the United States, a Mecca for millions. His Coney Island of the Mind is one of the best-selling volumes of poetry by any living American poet. Born in Yonkers, New York, in 1919, Ferlinghetti has received the Robert Frost Memorial Medal and the first Literarian Award of the National Book Foundation.