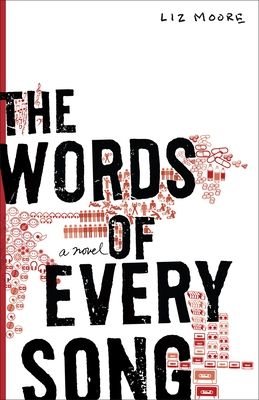 From the acclaimed author of Long Bright River and Heft, a novel that allows us to take a peek behind the curtain of the music industry

Liz Moore shows us the inner workings of an industry we’ve been fascinated with for decades. In these fourteen linked episodes, we meet a cast of characters from all the corners of the industry that we’ve come to glamourize. There’s the arrogantly hip, twenty-six-year-old A&R man; the rising young singer-songwriter; the established, arena-filling rock star on the verge of a midlife crisis; the type-A female executive with the heavy social calendar; and other recognizable figures.

Set in the sleek offices, high-tech recording studios, and grungy downtown clubs of New York, The Words of Every Song offers an authenticity drawn from Liz Moore’s own experience and brings an insider’s touch to its depiction of the music industry and its denizens.

Liz Moore is an author, singer, and songwriter. Her acclaimed novels include Long Bright River, Heft, and The Unseen World. She has also performed at many revered New York music venues. Liz is a graduate of Barnard College and was once a leader of her own quartet, the Liz Moore Band. She currently lives in Philadelphia.

“This is a remarkable novel, elegant, wise, and beautifully constructed. I loved the book, and admired the work and spark that went into it.”
—Roddy Doyle

“Imagine having happened upon Dylan singing in Harvard Square, or having caught one of Joni Mitchell’s early shows at an empty club. This is how I felt reading Liz Moore’s lyrical and powerful debut novel, like I was witnessing a timeless artist on the verge of transcendence. The Words of Every Song is a virtuoso performance. These beautifully rendered characters are melodies that echo in your head, chords that reverberate in your heart, and, long after you’ve turned the last page, you can still hear the audience calling for an encore.”
—Bret Anthony Johnston, author of Corpus Christi


“A young veteran of the New York club circuit meditates on music and the people who make it in a confident, affecting debut collection.

Theo Brigham is an A&R executive poised between innocence and experience. Jax Powers-Kline, his boss at Titan Records, is about to learn that she long ago ceased to be human. Siobhan O'Hara is the leader of a band that Theo hopes will be big, but most likely won't. Tommy Mays is an indisputable rock star, Titan's most popular, most lucrative act. These are just a few of the characters—some hopeful, some successful, all on the brink of transformation—whose stories are intertwined. Moore is a musician herself, and her depiction of the music industry rings true. But it's the stories concerning adolescence that are the strongest—like "Tia, a Terrible Dancer," about the fattest member of a teen girl group. Moore is, most vitally, a writer capable of capturing a character or a scene with one or two luminous details. As outstanding as this book is, it's almost as remarkable for what it isn't—not an expos, tell-all or satire. The reader isn't forced to extract enjoyment by, say, guessing who Tommy Mays really is. He really is a rock star who sometimes sings songs that he hates because his label likes them.

Sweet, wistful, artfully arranged: like the best mix tape anyone ever made for you.”

The Words of Every Song: A Novel (Paperback)