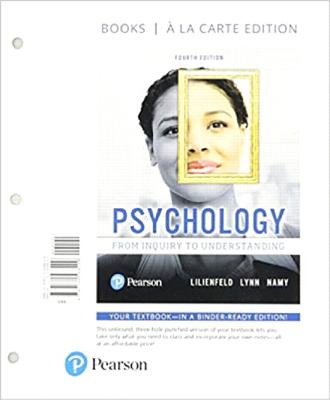 You can also purchase a loose-leaf print reference to complement Revel Psychology: From Inquiry to Understanding . This is optional.

Scott O. Lilienfeld received his BA in psychology from Cornell University in 1982 and his PhD in clinical psychology from the University of Minnesota in 1990. He completed his clinical internship at Western Psychiatric Institute and Clinic in Pittsburgh, Pennsylvania, from 1986 to 1987. He was assistant professor in the Department of Psychology at SUNY Albany from 1990 to 1994 and is now Samuel Candler Dobbs Professor of Psychology at Emory University and a visiting professor at the University of Melbourne in Australia. He is a Fellow of the Association of Psychological Science and was the recipient of the 1998 David Shakow Award from Division 12 (Clinical Psychology) of the American Psychological Association (APA) for Early Career Contributions to Clinical Psychology. More recently, he received the James McKeen Cattell Award from the Association for Psychological Science for outstanding career contributions to applied psychology and the Ernest Hilgard Award from APA Division 1 (General Psychology) for the integration of psychology across disciplines. Dr. Lilienfeld is president of the Society for a Science of Clinical Psychology within Division 12 and past president of the Society for the Scientific Study of Psychopathy. He is editor of Clinical Psychological Science and until recently was a regular columnist for Scientific American Mind magazine. He has authored or coauthored fourteen books and more than 350 journal articles and chapters. Dr. Lilienfeld has also been a participant in Emory University s Great Teachers lecturer series, a Distinguished Speaker for the Psi Chi Honor Society at the annual APA convention, and a keynote speaker at numerous national and international conventions. Steven Jay Lynn received his BA in psychology from the University of Michigan and his PhD in clinical psychology from Indiana University. He completed an NIMH Postdoctoral Fellowship at Lafayette Clinic, Detroit, Michigan, in 1976 and is now Distinguished Professor of Psychology at SUNY Binghamton, where he was the director of the Psychological Clinic (2007 2016). Dr. Lynn is a fellow of numerous professional organizations, including the American Psychological Association and the Association for Psychological Science, he is a diplomate in clinical and forensic psychology (ABPP), and he was the recipient of the Chancellor s Award of the State University of New York for Scholarship and Creative Activities. Dr. Lynn has authored or edited 22 books and more than 350 other publications, and was named on a list of Top Producers of Scholarly Publications in Clinical Psychology PhD Programs (2000 2004/Stewart, Wu, & Roberts, 2007, Journal of Clinical Psychology). Dr. Lynn is the founder and editor of Psychology of Consciousness: Theory, Research, and Practice (APA), and he has served on 11 other editorial boards, including the Journal of Abnormal Psychology. Dr. Lynn s research has been supported by the National Institute of Mental Health and the Ohio Department of Mental Health. His research has been featured in numerous media outlets, including the New York Times, New Scientist Magazine, Discover Magazine, CBS Morning Show, ABC s 20/20, Discovery Channel, and the Academy Award-winning documentary, Capturing the Friedmans. Laura L. Namy received her BA in philosophy and psychology from Indiana University in 1993 and her PhD in cognitive psychology at Northwestern University in 1998. She is now Director of the Center for Mind, Brain, and Culture at Emory University where she is also Professor of Psychology and Core Faculty in Linguistics. She recently completed a three-year term at the National Science Foundation as a Program Director in the Behavioral and Cognitive Sciences Division. She is past editor-in-chief of the Journal of Cognition and Development and a Fellow of the American Psychological Association. Her research focuses on the origins and development of verbal and nonverbal symbol use in young children, sound symbolism in natural language, and the role of comparison in conceptual development."